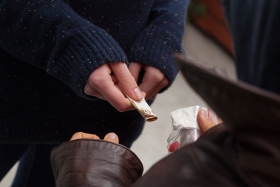 The criminal justice system in Missouri is notorious for being one of the harshest in the United States when it comes to dealing with drug crimes. Not only are the penalties upon conviction typically stricter for comparable crimes in other states, but many Missouri counties have a high conviction rate for simple drug crimes, including drug possession.

If you have been arrested for possession of a controlled substance, you need to act quickly to protect your rights, reputation, and finances from potential costly penalties. At The Hammer Law Firm, LLC, you can find a team of St. Louis drug possession attorneys with more than 30 years of collective experience dealing with criminal law.

As former prosecutors, we have the unique advantage of knowing what the opposition is going to say and do before they act. From the moment you retain our criminal defense services, you will already have taken a step in the right direction.

Start your defense case with a free consultation with our team.

What Are the Penalties for Possession of a Controlled Substance?

Missouri has some of the toughest drug laws in the country. Even a first-time drug possession offense can carry harsh penalties that may affect you for the rest of your life.

The above penalties typically describe first-time convictions and for comparatively low amounts of illegal drugs in the suspect’s possession. Penalties will only worsen for subsequent charges or for larger quantities of drugs found at the time of the arrest.

What Are the Penalties for Possession of Marijuana in Missouri?

Unlike many other states in the country, Missouri has not yet legalized the possession of small amounts of marijuana or marijuana products. If you are arrested with even one gram of marijuana on your person or in your immediate control, then you can be charged with a low-level misdemeanor.

If you are arrested for marijuana possession and already have a similar offense on your criminal record, you will be charged with an escalated misdemeanor that can penalize you with up to one year behind bars and thousands of dollars in fines. The potential criminal penalties upon conviction will only escalate even more for other narcotics and illegal substances.

How to Defend Your Drug Possession Charges

Our St. Louis drug possession attorneys know that there is always more than one side to every story and arrest. No matter the circumstances of your drug possession charges or what the prosecution says they have to use against you, there will be a way to construct a defense case.

Common defenses for possession of a controlled substance can include:

The Hammer Law Firm, LLC Is Here to Fight for You

Every case is unique, so all or none of the aforementioned defenses might work for your own drug possession charges. The surest way to decide upon the best strategy is by teaming up with The Hammer Law Firm, LLC and our drug possession lawyers in St. Louis, Missouri.

By analyzing the details of your arrest, evidence collected during discovery, and studying the probable moves of the prosecution, we can construct a defense that works towards an optimal case resolution, which may be a not guilty verdict, case dismissal, or charge reduction.